Smorgasbord sounds better than random, yes? :) You’re going to get a lot of tidbits in this post that won’t have much of a theme. I’m running with it. Join me!

The lovely hubs turned 32 on Saturday. Time has flown by! We met when I was 18 and he was 25. (Yep, 7 years age difference. He’d correct me though by saying 6 years and a handful of months.) We had a nice chill day, which suits him perfectly. We checked out the farmer’s market here in Kansas City, located downtown in the River Market area. We mostly just walked around and took it all in. Loads of fresh produce and flowers were for sale. The only thing we bought were two types of spices: blackened and backyard BBQ. They were only $2 each for a huge scoop! Regular spices (pepper, cumin, etc.) are only $1 for a huge scoop! While we were there, we also checked out the Opera House Coffee and Food Emporium because they have a Paleo grill in there. David is doing a modified version of the Paleo diet (I’ll have to tell you all about my thoughts on that in a separate post), so it was the perfect place to try. He had a porkchop with this fantastic almond pesto sauce and dressed greens on the side. I had one of the best veggie burgers I’ve ever had (they had non-Paleo menu items there, too). We’d definitely go back for the food, but not so much for the coffee. I had an iced chocolate caramel coffee drink. Talk about strong! It felt like it kicked me in the mouth every time I took a sip! And it was way too sweet. Welp, now I know. David left with a banana caramel protein shake and liked it.

After we left the farmer’s market, I thought it was fitting to head to a bookstore to peruse the cookbook section for a Paleo cookbook for his gift. Also, as a side note, David and I love going to book stores together. We aren’t super readers by any means, but we find it fun and soothing to spend an evening at Barnes and Noble. I could lose myself in the magazine section, while he could spend hours searching the fiction and best seller tables.

We looked through about 10 different cookbooks and found one!

The recipes seemed easier and more approachable (can I use that word…?) than other Paleo cookbooks. There are even a couple that I think sound good!

Once we left the book store, we went to Backwoods and bought pack covers, so if it rains on the trip (hopefully it won’t!), our stuff won’t get soaked. We continued the Paleo theme and headed to David’s favorite BBQ joint, Woodyard, to join 8 of our friends for dinner. He got a full rack of baby back ribs and was quite happy. :)

After we were full to the gills, a handful of us headed to Westport to hang out for drinks and conversation at The Foundry. A successful birthday for sure! Love you darling! Thank you for being my biggest blog supporter! (I read all my posts to him before I publish them. Yes, even this one.)

We were productive on trip stuff. You better believe it! There’s still a lot to go. But we’re going to celebrate the little victories; otherwise, I would be a frazzled wreck.

We got a new roof! A month or so ago a guy was walking from house to house looking to inspect roofs to see if he could find any that had endured hail damage. The inspection was free of course, so I was like why not! No harm in it. Plus, he said he’d only suggest replacing it if he was fairly certain the insurance company would pay for it. After a quick walk on the roof, he determined that we did have hail damage and that we should get an insurance person out to look at it. This guy even called State Farm for us right there. The insurance guy came out the next day! Talk about service. The insurance guy agreed there was enough damage to replace it and wrote a check for the work. We only have to pay our deductible! So, this new roof should only cost us $750 (compared to $5,000 or so). Score! I was surprised there was enough damage to replace it. They said the hail happened back in April. I don’t remember it. And on top of that, we haven’t had any indication our roof was damaged — no water dripping in (‘course that would be extreme, huh?), etc. 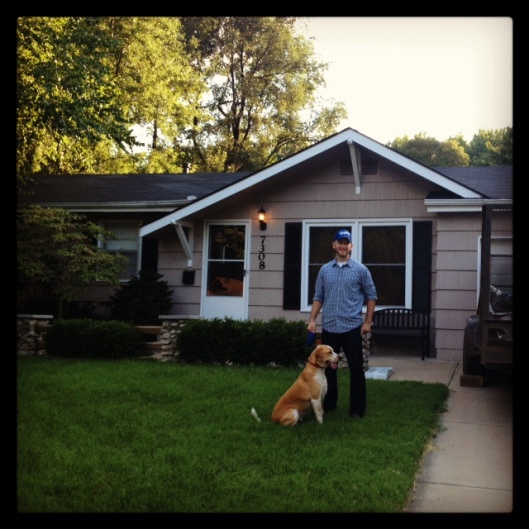 But I look at it as adding value back in to our house and that is certainly great. We went with black shingles to match our black shutters. When I first saw them, it was a bit of a shock, but I think they look sharp. And David likes them, which is really what matters. (I let him take care of all the house stuff like this, insurance, etc.) We are also getting spankin’ new white gutters along with the deal. Those aren’t on yet, but should be soon! I think we’re coming out ahead for sure!

I had no idea there was a National Dog Day, but then again, they have a day for all sorts of stuff. I, of course, love my awesome dog, so you get a picture of cutie pie Dexter to celebrate.

He’s become quite the cuddle bug, which I thoroughly enjoy.

Justin Timberlake’s Performance at the VMAs

We need to take a moment to appreciate this fine gentleman of a performer after seeing his swoon-worthy 20-minute or so performance at the VMAs. The dude is seriously talented. He even thanked his mom in his acceptance speech. Really JT?! Like I couldn’t like you any more. Well, now I do.

Jessica Biel, you are one lucky, lucky woman. I am super pumped though because I’m seeing him in concert in February! So there’s that at least. :) And his next album is coming out soon. Yessss. OK, I think I’ll be content after all.

PLUS, he got the gang back together for a performance. I miss Nsync dearly, so I was super happy and danced while I was sitting on the couch watching the reunion.

Thanks for following along with this crazy random post! Until next time, have a fantastic week!

3 thoughts on “Smorgasbord of Different Things”